The cost of college is rising, and growing numbers of families at all income levels are turning to student loans to pay for higher education.

Nationally, nearly seven in 10 students (69 percent) who graduated from college in 2013 had student loans they have to pay back, according to the Institute for College Access and Success. The average debt of students leaving school was $28,400, up 2 percent from the previous year and 25 percent from 2008.

The nationwide Class of 2013 was the most indebted class ever. Fortunately for them, the dubious honor did not stick. It passed to the Class of 2014, whose average debt at graduation for a bachelor’s degree was about $33,000, according to Edvisors, which provides information about financial aid. Figures for 2015 aren’t available yet, but the trend is expected to continue. However, the picture is slightly different for Utah college students: Only about half of students borrow money for college. Of those that borrow, the average debt for all Utah students is far less than the national average – $22,418. 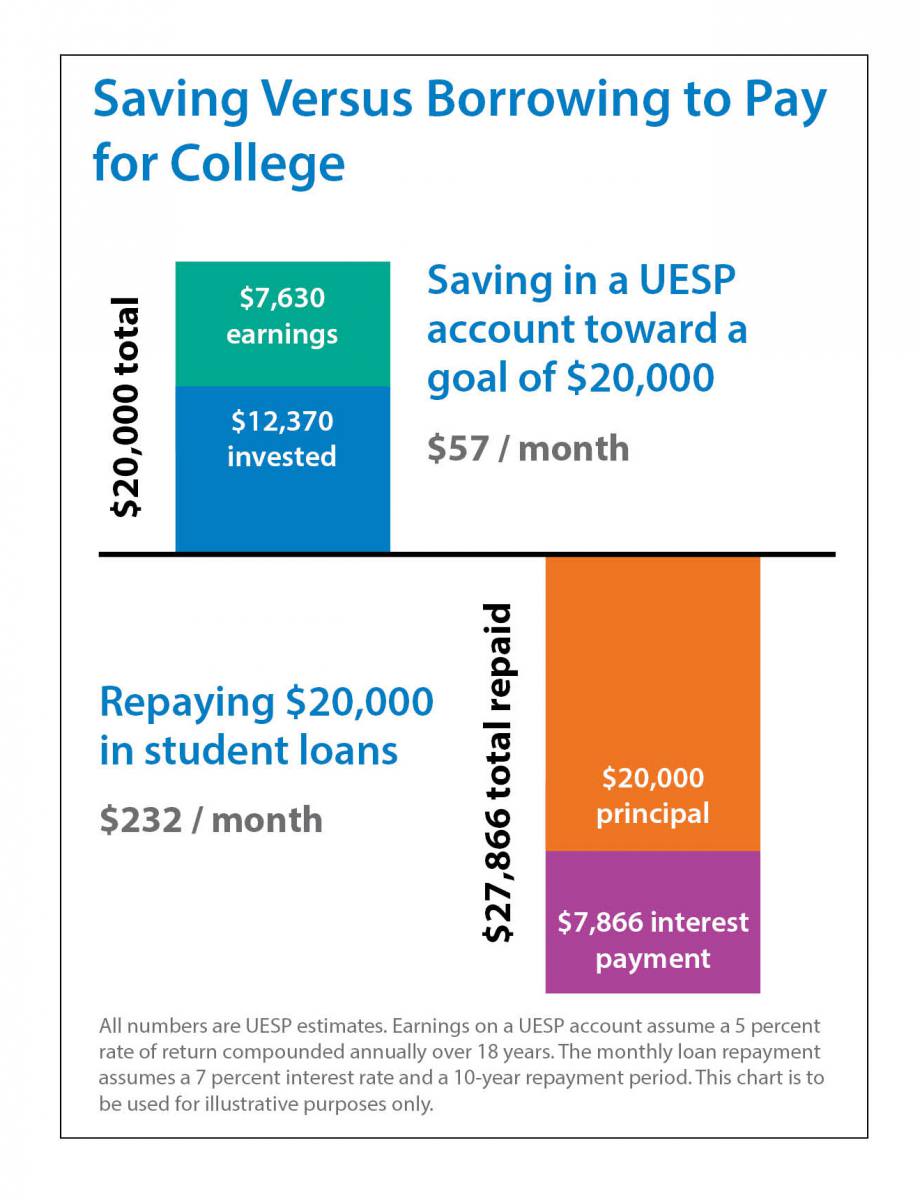 “UESP account owners should be better prepared to face the challenge of paying for college than people without 529 accounts. Every dollar saved is a dollar that doesn’t have to be borrowed and repaid with interest,” said Lynne Ward, executive director of UESP.

With higher education expenses continuing to increase every year, saving even small amounts can make a big difference down the road. The secret is to start saving early and regularly, said Thomas Maloney, chairman of the University of Utah economics department.

“Even if savings won’t cover the full cost [of college], it will be beneficial to do what you can now to limit your long-term debt,” Maloney said.

“In the end, your financial package will include a lot of elements—some savings, some borrowing, some grants or scholarships. Saving a few dollars over a long period of time, and earning interest on that saving, will reduce the need for those other components of the package,” he said.

At $1.2 trillion, student debt in America is nearly double what it was a decade ago. Student debt is now the largest consumer liability, surpassed only by mortgages. The debt load comes with a cost for society. It limits the ability of borrowers to buy homes and start families and weakens consumer demand in other parts of the economy, Maloney said.

In 2013, three-quarters of borrowers across the country or their children made personal or financial sacrifices because of student loan payments. Forty-one percent postponed saving for retirement, while 40 percent delayed buying a car, and 29 percent put off a house purchase, according to American Institute of CPAs. Marriage suffered, too. Student debt drove 15 percent to delay marriage.

The Pew Research Center says solid majorities of American graduates from lower-middle and upper-middle families now leave college with student loans to repay. Half of students from the most affluent 25 percent of U.S. families graduated in 2012 with college loans, according to Pew. That’s up from less than a quarter of affluent students in 1993.

While rising tuition and increased enrollments get a lot of blame, it isn’t clear why student loan debt is accelerating. Researchers at the Brookings Institution found that “net” tuition—the actual cost to students, minus grants, tuition discounts, and tax credits—is rising at a much lower rate than the “sticker price” of college. Average net tuition increased 13 percent and the number of people going to college moved up 27 percent between 2002 and 2012. But student loan debt soared 77 percent. Students borrowed $110 billion for the 2012–2013 school year, more than four times what students borrowed 20 years earlier, according to Pew.

UESP, a nonprofit 529 college savings plan, can help reduce the need for student loans. If you invest $57 a month in a UESP account, the account balance may grow to $20,000 after 18 years, assuming a 5 percent return compounded annually, according to a UESP estimate. If you were to borrow $20,000 in student loans instead, you’d be obligated to repay $27,866, or $232 a month, assuming a 7 percent interest rate and a 10-year repayment period.

“Higher education opens up wider career options with better incomes,” UESP’s Ward said. “It makes sense to save to support that investment.”